A couple from Germany is filing a lawsuit against a cruise company after they were allegedly booted from the ship for having loud sex.

The cruise company, however, has offered a different version of events.

The couple, identified as Renate F. and her husband Volker by German travel news outlet Reise Reporter, left for their two-week Caribbean cruise with TUI Cruises on April 1, aboard the Mein Schiff 5. That night, they say, they made love in the cabin and subsequently got into a verbal argument with each other.

Renate said that the the balcony door was open during their lovemaking session, during which she admitted to being quite loud, the outlet reported. Otherwise, the couple said they caused no damage to their room.

Shortly afterward, a manager with TUI visited the couple’s cabin with security in tow, and allegedly informed the two that the captain had decided to remove them from the ship. They say they were left in Barbados in the early hours of April 2, and told to find their own way back to Germany. 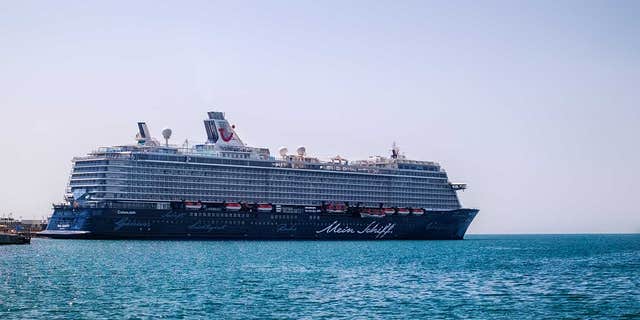 TUI Cruses did not confirm the company’s reason for removing the couple from the Mein Schiff 5 (seen above, in 2018), but said it “was done to protect both the guests’ safety and the safety of other travelers.”
(iStock)

The couple is now reportedly suing TUI for the cost of the cruise as well as flights, lodging and other expenses incurred while trying to organize transportation home from Barbados. Renate said they were also seeing additional damages for their troubles.

“Due to a security-related incident TUI Cruises made use of its domestic authority rights and asked the guests to leave the vessel,” the statement reads. “This was done to protect both the guests’ safety and the safety of other travelers. There has already been a correspondence with the guests in question in which we have set out our view of things.”

The cruise line also said it would not provide a detailed account of the incident in order to “protect the personality rights of the guest.”

TUI further said the cruise line reserves the right to remove any guest “in exceptional cases,” and at the company’s discretion.

As of Monday, TUI had not been served with the couple’s lawsuit.