A 2016 study of tobacco industry email marketing by the Association of Nonsmokers-Minnesota and ClearWay Minnesota found that tobacco companies cross-promoted other products and causes to those in their email marketing databases. People in their study who had signed up for marketing materials from various tobacco brands received emails from the group Citizens for Tobacco Rights, which is “operated on behalf of Philip Morris USA, U.S. Smokeless Tobacco Co., John Middleton, and Nat Sherman.”

As the study’s authors say: Direct email marketing is a way for tobacco companies to avoid restrictions on public tobacco advertisements.

On OATH’s website, the group amassed 6,788 signatures on their pledge against the state’s tax hikes. Looking at just the cost of Facebook ad placements ($68,311), that works out to just over $10 spent per person who signs on.

According to the Centers for Disease Control and Prevention, cigarette and smokeless tobacco companies spent $29 per person (including children) on marketing in the US in 2016 and $250 per smoker.

Despite Facebook’s ad policies prohibiting ads that promote the sale or use of tobacco products, political ads are allowed. Getting people to a website where they input their data in opposition to a piece of legislation is a convenient way to collect personal data without selling or promoting the use of tobacco.

Point and Engadget asked Facebook if these advertisements violate its policies on tobacco advertising, but it didn’t officially respond to our request for comment by the time of publishing. 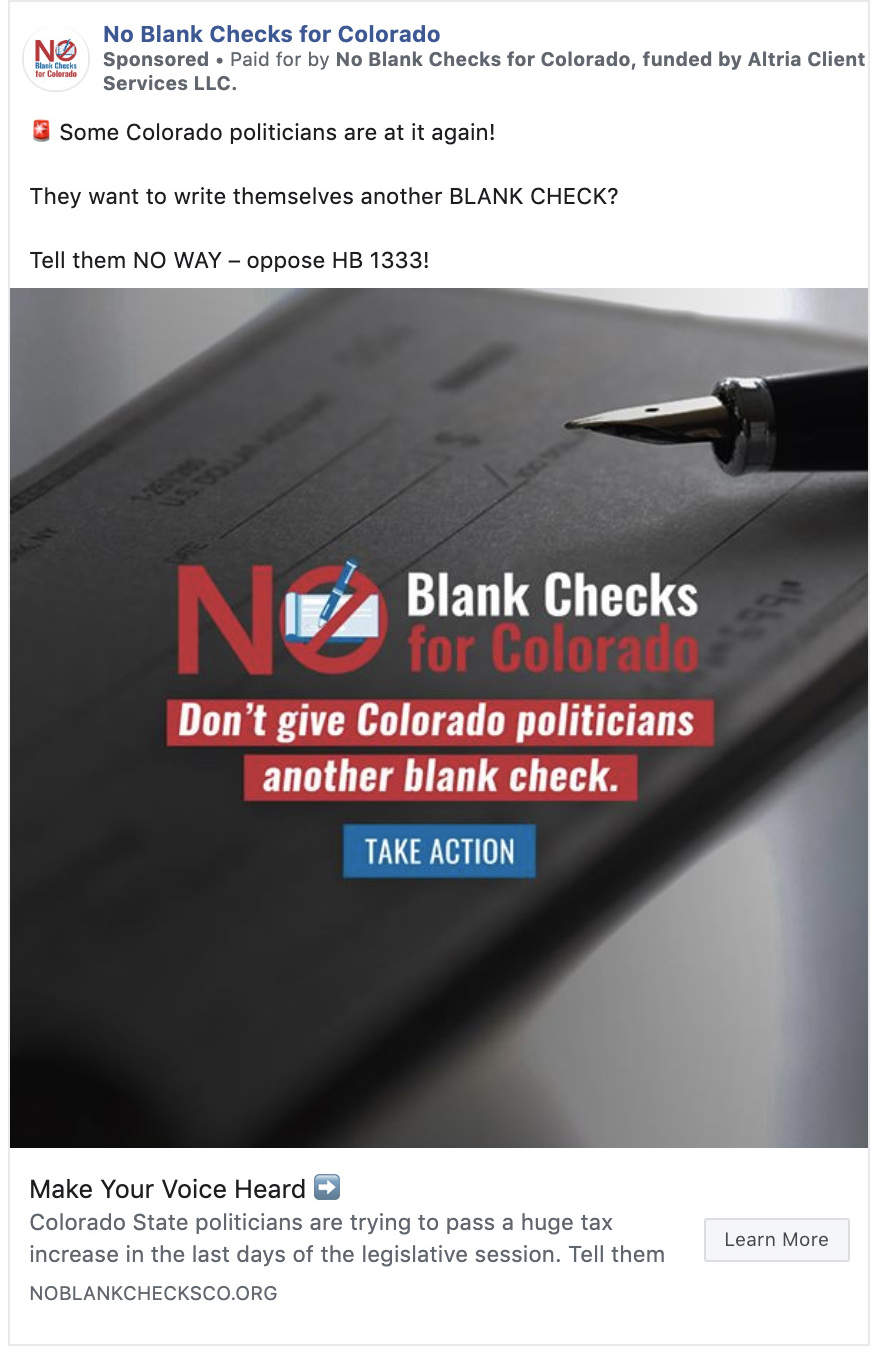 The strategy of creating front groups — known as astroturfing — is not new. Groups like North Dakotans Against the 400% Tax Increase, Californians Against Unaccountable Taxes, and Missourians Against Tax Abuse have been created for various efforts to fight anti-tobacco legislation since the 2000s.

Most of these groups’ websites or Facebook pages no longer exist. Those that do, like OATH and No Blank Checks for Colorado, were set up recently — in March and April 2019, respectively. Often, these groups will be set up when a legislative issue comes up and disappear after it has been resolved.

Tellingly, groups like this list no organization members, no grassroots organizers and no staff on their websites. They also rarely post on Facebook, preferring instead to use targeted Facebook ads that will only be seen by selected sections of the population. OATH has only two Facebook posts but nearly 90 ads, and No Blank Checks for Colorado has three posts with nearly 60 ads.

Veiled as anti-tax groups, their focus is really on taxes that affect tobacco prices. While OATH had a lot to say about the proposed tax increase on tobacco products, it made no mention of a proposed cellphone fee, a commercial activities tax or a carbon cap-and-trade tax bill in Oregon this legislative session.

Veiled as anti-tax groups, their focus is really on taxes that affect tobacco prices

This type of astroturfing and data-collection is not confined to tobacco companies. But for an industry that is restricted by tough marketing regulations in the US, this is a potentially lucrative loophole.

When asked for comment about these practices, RAI Services Co. said, “Oregonians Against Tax Hikes (OATH) is a 501c4 organization formed by Altria Client Services, LLC and RAI Services, Inc, to advocate against exorbitant tax hikes on tobacco products in Oregon.

“All messages sent by constituents through the OATH website clearly state that the signees oppose tax increases on tobacco products in the state, and RAI and Altria’s interest is disclosed on the OATH website and throughout display advertising (“a project of RAI Services Co. and Altria Client Services, LLC.”). Personal information sent through OATH to contact legislators is not used for tobacco product marketing.”

Altria Client Services, LLC did not respond to our request for comment.

Wilmore, however, believes that tobacco companies are being purposefully deceptive when it comes to these dummy campaign groups.

“They are working to recruit people to sign up in support of these great sounding groups,” Wilmore explained. “People are doing it without really realizing that really they’re giving their name and information to the tobacco industry.”