Weber is admittedly a late entry into the pellet-grill game. It did its homework, however, and rather than simply put out a line of pellet grills with the Weber logo on them, it brought its wealth of grill knowledge to the table. It also listened to pellet-grill users, collecting info on what they did and didn’t like about using these machines.

“We developed from the ground up with a white sheet of paper a completely new approach to the pellet grill designs,” Scherzinger continued.

The first area Weber tackled on SmokeFire was the actual cooking process. In order to convince people to invest at least $999 on a grill, it has to be versatile enough to cook everything well. The company discovered that most existing pellet grills max out at around 400-450 degrees, despite claims of 500 or higher. This is fine for a lot of high-temp uses like roasting or even pizza, but for a true quick sear, you need a grill to get hotter. Weber devised a solution for SmokeFire that ensures temperatures of up to 600 degrees.

“You can get a steak that doesn’t look like it was baked in an oven, but one that looks like it was grilled on a Weber grill.” Scherzinger said. “We sought to make this grill the first pellet grill that can really be a grill.” In other words, instead of offering both low-and-slow barbeque-style cooking alongside a higher temperature range, Weber wanted true searing ability — whether you’re cooking burgers, steaks or something else. 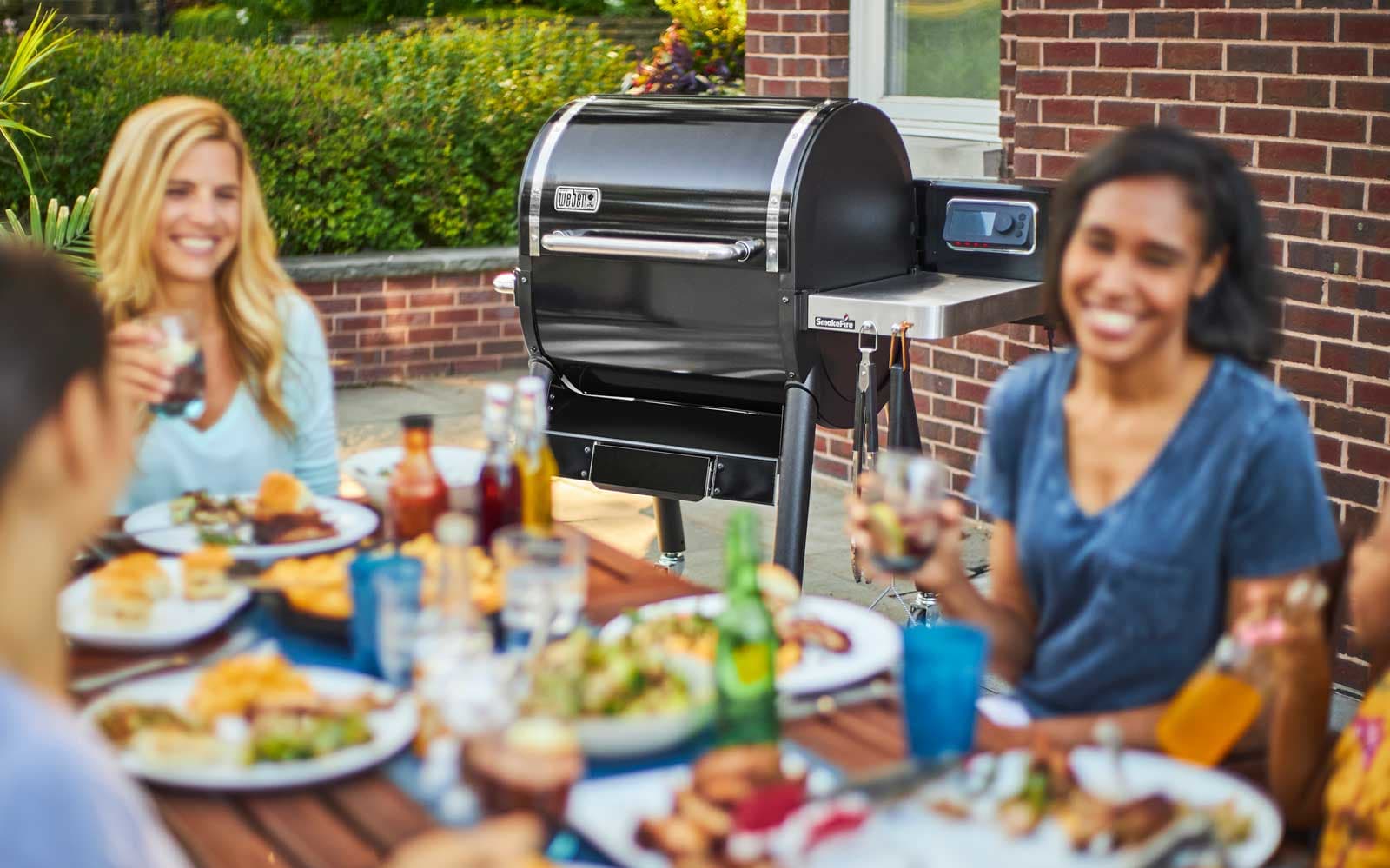 Next was grill performance. Those Flavorizer Bars not only protect a grill’s heating element and enhance flavor, but they also help evenly distribute heat. Most pellet grills have a solid sheet of metal that protects the fire pot and directs grease to a collection container underneath or on the side. That large element also helps keep ash from flying up on your food. Weber chose to bring a battle-tested element of its gas grills to its pellet model, rather than include one large piece of steel. And by doing so, the company also made a much less sexy task — cleanup — a lot easier.

That piece of metal in most pellet grills has to be protected, otherwise it will rust quickly if you’re not careful. Grill makers offer aluminum liners to help with this, or you can simply wrap the entire thing in aluminum foil. Either way, it’s extra work, and extra cost. With the Flavorizer Bars, you don’t need a cover, and they’re much easier to remove and handle.

But that’s just one piece of the grill. In order to clean most pellet models, you have to completely remove everything from the inside. When you count the grates and other protective pieces, we’re talking six or more items. Then you have to break out the shop vac. Yes, most companies advise you to clean out the ash and dust that accumulates during the cook with a vacuum. It’s fine if you already have one, but if you don’t, that’s an additional purchase on top of a pricey grill. Either way, the the cleanup process is awful, and you need to do it after every third or fourth cook to keep your grill running smoothly and safely. And, most importantly, to keep ash out of your food. Trust me, I’m speaking from experience: It’s the worst thing about these grills.

Weber realized this wasn’t a great experience, so it did something about it. 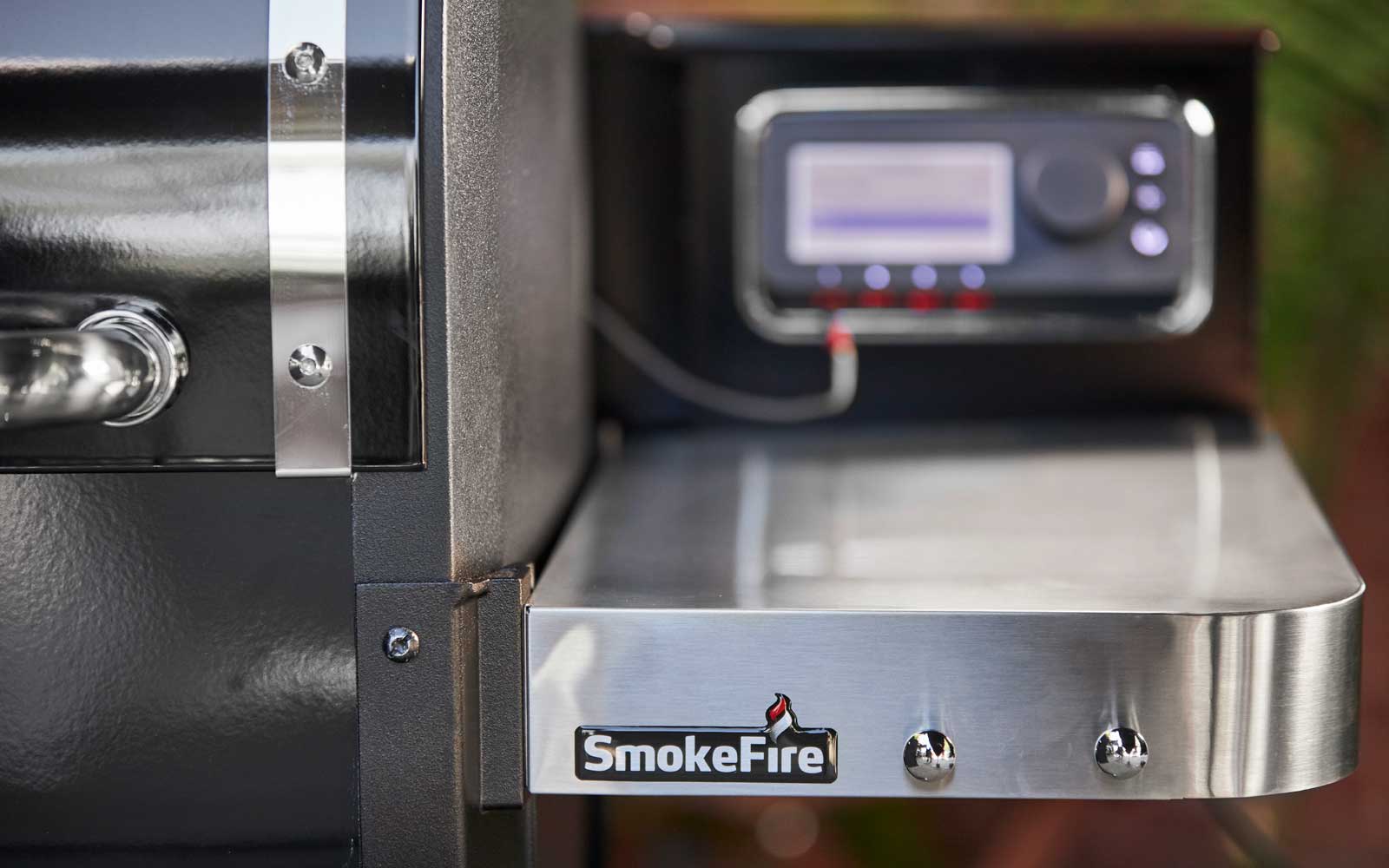 “We developed a different design in our engine, and in our shields and filters, inside the grill box that prevents the ash from flying up and landing on top of the food,” Scherzinger noted. “All of the ash lands in the drawer.” That drawer is a slide-out compartment that’s easily accessible from the front of the grill. Here, both ash and grease collect for easy removal. Sure, you’ll want to take the SmokeFire’s internal components apart and give it a deep clean from time to time, but if what Weber claims is true, you won’t have to do it nearly as often. That’s a welcome change.

The company also opted to put the pellet hopper around back. This isn’t a novel decision — some other grill makers have done the same — but that location does provide its advantages. There’s less potential for an auger jam since the setup is now partially gravity-fed. The auger is a drill-like spiral that moves the pellets from the hopper to the fire pot. When the hopper is on the side of a grill, the auger path is longer, so there’s more space for something to go wrong.

Where most companies offer one or maybe two food probes, Weber has opted for four. This isn’t unique to SmokeFire, either, but the ability to monitor that many things simultaneously isn’t a common feature on these grills.

“We increased the number of probes to add a level of versatility,” Melanie Hill, Weber’s director of IoT, explained. “Let’s say you’re grilling for a large party and someone wants medium rare, someone wants rare and someone wants a well-done steak. You have the option to have up to four probes.”