Android tablets are on life support. The iPad has run away with the consumer tablet market, and where it has left some scraps, Amazon’s line of Fire tablets has picked them up. Even Google is done trying to compete with premium Android tablet hardware.

But that isn’t stopping Samsung. The $649.99 Galaxy Tab S6 is the company’s latest attempt at a device that can be used for both consuming content and productivity. And yes, it runs Android.

The Tab S6 is an excellent content consumption tablet. It has a great screen and speakers, and it’s thin and light enough to hold for extended watching sessions. It even has enough battery life to last through at least three Marvel movies. On the flip side, Samsung’s attempts to make the Tab S6 a productivity device fall short, there are a number of annoying bugs in the software, and it’s not a great enough device to replace your laptop. 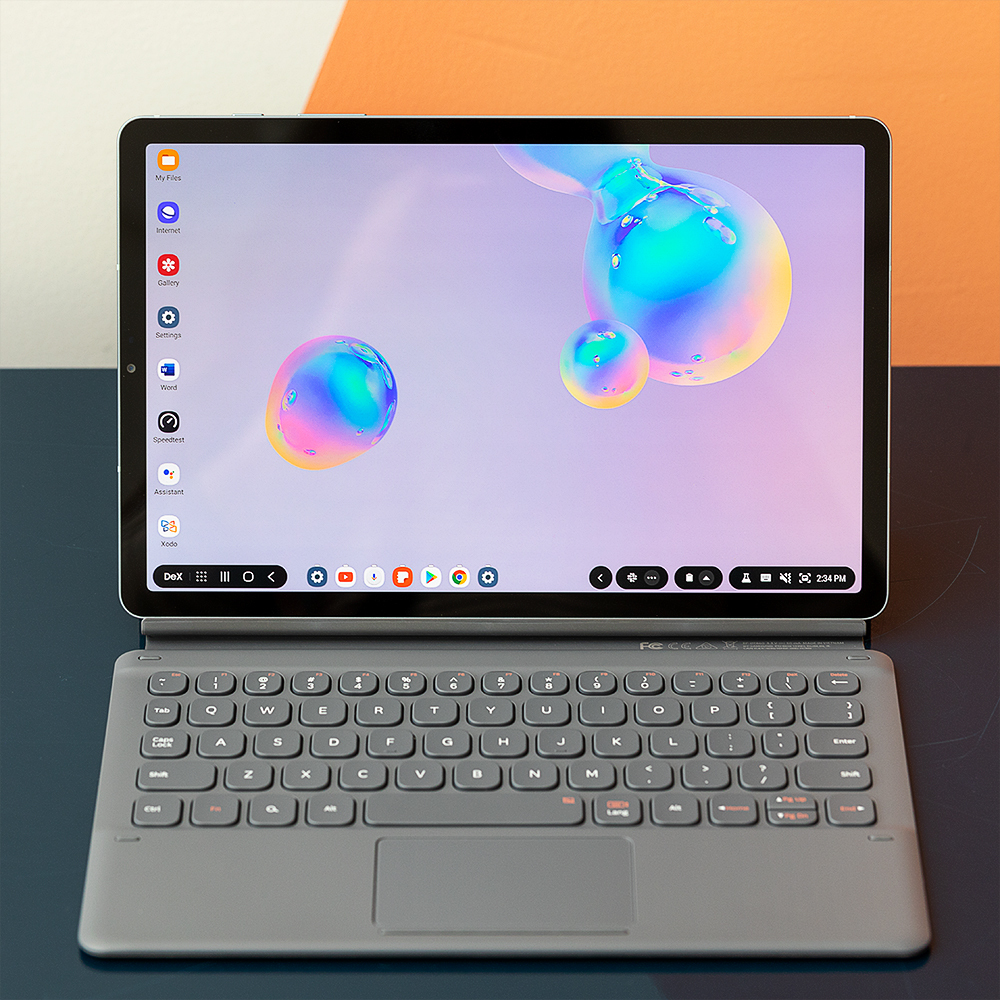 Samsung makes excellent hardware, and, as the company’s flagship tablet, the Tab S6 is no exception. It’s a thin metal-and-glass slab that weighs less than a pound, and it’s easy and comfortable to hold for long periods of time.

The star of the show is the 10.5-inch OLED HDR (HDR10 and HDR10+, but not Dolby Vision) display. This screen is really a treat to look at: colors pop, blacks are inky deep, and it gets bright enough to use outdoors. It’s an excellent screen for watching movies or YouTube videos, and it has enough resolution for text to look sharp at a comfortable viewing distance. It’s basically the same pixel density as the iPad Air or iPad Pro.

The display isn’t perfect, however. Like the Galaxy S10, the Tab S6 has a fingerprint scanner embedded in the screen. Samsung is using an optical scanner here, as opposed to the ultrasonic one found in its phones. On top of being slow and unreliable, the scanner just doesn’t work at all when the blue light filter activates in the evening. Other manufacturers that use similar optical scanners on their phones, such as OnePlus, force the screen to disable the blue light filter for the second it takes to scan the fingerprint, but Samsung hasn’t enabled that on the Tab S6.

The screen’s 16:10 aspect ratio is great for watching video, and it doesn’t feel terribly awkward when holding the tablet in portrait orientation for reading. But it’s quite cramped for productivity work when using the attached keyboard or browsing the web in landscape. Though the screen has the same size screen as an iPad Air on paper, the differences in aspect ratio (the iPad uses a 4:3 screen) mean Samsung’s screen is considerably smaller in practice.

Finally, there’s a noticeable jelly effect when scrolling in portrait orientation, which is disappointing to see in a tablet this expensive. These faults might not matter to you specifically, but when you’re paying $650 for a tablet, you should expect everything about it to work without these kinds of issues — especially when the competition has no such problems.

Surrounding the screen are four Dolby Atmos-enabled speakers that sound great and even give Apple’s more expensive iPad Pro a run for its money. Unfortunately, the Tab S6 lacks a headphone jack, so you’ll need to use Bluetooth headphones or a USB-C dongle for private listening.

There are cameras on the front and back, including a dual-camera setup on the rear with a standard camera and an ultrawide option. Strangely, there’s no LED flash, which is something that comes in handy when using a tablet to scan documents.

Inside the Tab S6 is a Snapdragon 855 processor and either 6GB or 8GB of RAM. It has up to 256GB of storage, plus support for microSD cards for expansion. I’ve been using the base level 6GB RAM / 128GB storage model and have not had any issues with performance, even while multitasking heavily and switching between apps frequently.

For battery life, the Tab S6 is able to last all day while in use, even if I’m hammering it with productivity apps and playing video all day long. It has poor standby time, though: on more than one occasion, I left the tablet for a couple of days without using it, and it was dead when I picked it back up.

Samsung includes an S Pen in the box with the Tab S6, and it’s very similar to the S Pen that comes with the Galaxy Note line of smartphones. It’s a bit thicker and doesn’t have a little storage silo like the phones offer, but it has the same features and capabilities of the phone version. To charge the pen, you attach it to the back of the tablet via magnets, and it will charge wirelessly, much like how the iPad Pro charges the Apple Pencil. Just as with the Apple Pencil, it’s very easy to knock the S Pen off of the back of the tablet, but if you get one of Samsung’s option folio or keyboard cases, the stylus is kept in place by a flap.

Speaking of keyboards, the Tab S6 does not come with one in the box. The optional keyboard folio case for the Tab S6 runs a steep $179.99, which pushes your all-in price on an entry-level Tab S6 with 128GB of storage up to $830 (provided you don’t get the bundle on a sale or discount, which are frequently available). The keyboard attaches to the tablet via magnets and a pogo pin connector — no Bluetooth pairing here — and it’s actually separate from the back cover and kickstand that sticks to the tablet via an adhesive-like microsuction foam. This design lets you prop the tablet up for viewing video without requiring the keyboard to be right in front of you, which is something you can’t do with Apple’s Smart Keyboard for the iPad Pro, and it’s a godsend on tiny airplane tray tables. Prying the back cover off the tablet requires some work, but it doesn’t leave any residue behind. Samsung tells me it doesn’t expect people will be removing the back part of the case very frequently, and I tend to agree with that assumption.

It’s surprisingly easy to adjust to typing on the keyboard, even though it has a smaller layout than a standard keyboard. There are function keys at the top, and the Tab S6 supports a variety of keyboard shortcuts, though I wish they were more universally supported across the Android ecosystem. The keyboard does not have a backlight, which made working in a dim airplane cabin challenging, but most tablets like this do not have backlights on their keyboards either.

There’s even a small trackpad below the keyboard for mousing around in Samsung’s DeX software mode (more on that in a bit), but it’s small and frustrating to use. It has poor palm rejection when I’m typing, causing the cursor to jump around erratically. It’s also limited in what it can do, even in DeX mode. I can’t select text with the trackpad in Word or use multifinger gestures to flip between apps, for example. I ended up turning it off frequently (via a keyboard shortcut, conveniently).

It’s also not easy to use the Tab S6 and its keyboard on your lap. The keyboard doesn’t rigidly connect to the tablet, so it flexes and moves unless it’s on a rigid surface like a desk or a table. The iPad’s keyboard isn’t much better to use on your lap, but it’s considerably more stable.

For software, the Tab S6 runs basically the same software as Samsung’s phones: Android 9 Pie with Samsung’s OneUI interface on top. It has all of the same features you might be familiar with if you own a recent Samsung phone, including, yes, Bixby. I don’t have an issue with the software for basic content consumption needs, like watching Netflix or Hulu or reading in the Amazon Kindle app or Pocket.

If you have a Samsung smartphone, you can answer calls and respond to messages from the Tab S6, though I’d like to have seen even greater integration between Samsung’s own devices. It’s not possible to remotely start a mobile hot spot on my Galaxy Note 10 from the Tab S6, however, like I can do with an iPad and an iPhone.

In an attempt to make the Tab S6 better for productivity, Samsung now lets you run its DeX desktop software right on the tablet. (You can launch into DeX via a new shortcut on the keyboard, through a toggle in the quick settings menu, or have it autolaunch when you attach the keyboard.) DeX on a tablet is basically the same as DeX on a big screen: it lets you run desktop-like versions of mobile apps, with multiple windows and the ability to see more than one at a given time. Unfortunately, DeX still has a lot of limitations and unfinished features. App windows don’t remember their state when you switch between DeX and standard mode, so you end up having to re-create your window arrangement every time, and certain apps, like LastPass, just refuse to launch at all in DeX mode.

Using DeX on such a small screen is also frustrating due to the amount of scrolling and flipping between windows that’s required to multitask. Virtual desktops would help with this, but DeX doesn’t support them. There is also no window snapping features that I could find; resizing the windows requires tapping and dragging on the screen or using the fiddly trackpad on the keyboard. DeX on the Tab S6 is nice to have in a pinch to knock out an email while on the go, but it’s not something I’d like to use as my primary computer or for any extended length of time.

There are other bugs in Samsung’s software that I’ve found frustrating to deal with. The night mode, which flips the interface to a dark shade in the evening, constantly forgets its settings; the screen brightness will aggressively dim itself to unreadable levels when I hold the tablet in landscape because my hand blocks the light sensor; search in DeX doesn’t work on the first keystroke, requiring me to type “OOutlook” if I want to launch my email app; and I’ll have to frequently reboot the tablet to get the Wi-Fi to work.

Basically, the Tab S6 is a very good tablet to use to watch video, provided you don’t block the light sensor with your palm. If all you want from a tablet is to lean back and watch video on your couch, the Tab S6 is excellent for that.

The problem is that “good for watching video” is about the lowest bar to hit for a tablet in 2019. The iPad was great for watching video almost 10 years ago, and Amazon’s Fire HD 10 will do the job for about a third of the cost of the Tab S6 if that’s all you need. You might get a slightly better display and better speakers with Samsung’s tablet, but it’s hard to justify spending two or three times as much for those things.

To really justify its cost and its existence, the Tab S6 has to be able to do more than just be a personal video player. It has to be able to also be a productivity machine, which is something that can be used to get actual work done. Despite Samsung’s best efforts, the Tab S6 falls short.

Vox Media has affiliate partnerships. These do not influence editorial content, though Vox Media may earn commissions for products purchased via affiliate links. For more information, see our ethics policy.